11 devices that can be replaced by Amazon Echo and Alexa

Who does not know the problem when suddenly you want more sockets because the number of electrical devices is constantly increasing. The good news: with an Amazon Echo and the voice assistant Alexa, the flood of household appliances can be effectively contained. Because the “intelligent dream team” can replace 11 household appliances at once. For most use cases, a cheap Amazon Echo Dot is sufficient. If you want to go all out when it comes to entertainment, you can turn to the Amazon Echo (4th generation) or Amazon Echo Studio.

We are showing 11 frequently used household appliances that owners of an Amazon Echo can do without thanks to the voice assistant Alexa and her intelligent functions – and thus save money and the necessary socket locations. 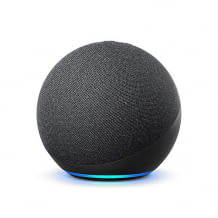 Each Echo is also a WLAN loudspeaker and therefore predestined for Alexa music playback. What many do not know: You do not need a paid music streaming subscription to stream music. Because Amazon Music or Spotify offer z. B. Free streaming that Amazon Echo and Alexa support. Not all functions will then be available, but buyers of an Amazon Echo kill two birds with one stone: the purchase of a stereo system and expensive CD purchases are a thing of the past.

Music lovers do not have to do without listening to the CDs they have already bought. Because our recommended echoes have a 3.5 mm jack plug via which external audio devices can be connected to the intelligent loudspeaker.

Our expert recommendation: Amazon Echo Studio with HD sound or an Amazon Echo of the 4th generation are best suited for replacing a stereo system. 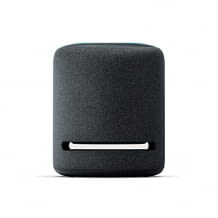 The function of a radio can also be confidently handed over to an Amazon Echo with Alexa. Even Amazon Echo Dot offers good sound and with the pre-installed free TuneIn Radio App, users have access to almost all local radio stations, but also a worldwide selection of streamed live radio programs. Once the Amazon Echo has been set up, it is sufficient to instruct Alexa to play the desired program with "Alexa, tune in (radio station)". Anyone who has always wanted to listen to Russian radio, for example, simply asks Alexa to play the Russian station with “Alexa, tune in Russkoe Radio”. Annoying fiddling with the radio tape for tuning is a thing of the past. The radio comes digitally to the desired room, even without DAB radio. In addition to radio stations, podcasts can also be streamed via TuneIn. With the Alexa voice command: "Alexa, tune in star stories", you can z. B. call up the podcast of the same name. Alternatively, there are also many radio skills for Alexa.

Our expert recommendation: An Amazon Echo Dot is enough for good radio sound, if you want better audio quality, opt for the Amazon Echo 4.

Telephoning with Alexa – is that actually possible? Yes, but Amazon Echo and Alexa need the Vodafone OneNumber Calling Service for this. Vodafone customers can use it to link their mobile phone number to an Amazon Echo. Afterwards, users can instruct Alexa with, for example, “Alexa, call Paul” to start a phone call and then make a call using the intelligent loudspeaker. Before doing this, however, the telephone address book must be sent to Alexa. If you don't want that, you can dictate the telephone number to the voice assistant.

A little catch that we don't want to hide here: calls only work in the outgoing direction, if you are called yourself, Vodafone does not forward calls to the Echo, but to the smartphone. 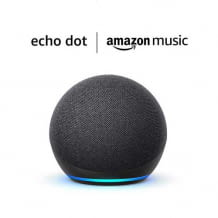 4. Replace the intercom with Amazon Echo and Alexa

If family members are spread over several floors of the house, it can often be difficult to get everyone around the same table. One way to save yourself climbing stairs and to protect the vocal cords is in-house telephone systems. With an Amazon Echo and Alexa you can save yourself the cumbersome installation and possibly necessary cabling. Thanks to the drop-in function, Amazon Echo and Alexa make it possible to use an echo as an intercom or to send messages.

Our expert recommendation: If you want to equip as many rooms as possible with cheap echoes, you can use the Echo Flex.

Some love it, some hate it: the alarm clock next to the bed, which z. B. has a bad habit of waking working people out of their sleep in the morning. Disruptive side effect: Many radio alarm clocks or sound alarm clocks with built-in clocks have an integrated, luminous digital display that is a nuisance when falling asleep at night.

Every Amazon Echo comes with an alarm clock function, because it is one of the most popular tasks that users transfer to Alexa. The voice command "Alexa, set the alarm clock for 6 o'clock in the morning" is enough and the loudspeaker takes over the task. In the Alexa app (Android | iOS) users can choose between different alarm tones and can also specify the days of the week on which they should be woken up. 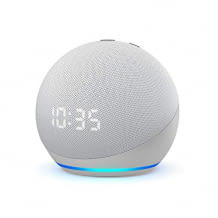 The audio output from Amazon Echo does not come close to a good soundbar or a 5.1 speaker system, however, the Amazon Echo (4th generation) costs just under 100 euros (as of 11/2020). The technical equipment is quite impressive: The speaker processes Dolby Audio and has a 76 mm woofer and 20 mm double tweeter, which enables Dolby stereo sound. Amazon Echo Studio supports Dolby Atmos and offers a 25 mm tweeter, three 51 mm mid-range speakers and a 133 mm woofer.

The output of the audio data that are received via the TV receiver are also output via the TV speakers. However, since video streaming services such as Netflix or Amazon Prime Video are increasingly replacing traditional television, we don't think that's a bad thing.

Our expert recommendation: We recommend Amazon Echo Studio, as it supports Dolby Atmos, together with a compatible Fire TV Stick.

Anyone who still heats with a conventional heating system or wall thermostats can retrofit them with Amazon Alexa, an Echo and compatible smart thermostats to create an intelligent heating system. The expensive new acquisition of a heating system is no longer necessary. The "transformation" is simple and can in most cases be carried out without the help of specialist staff.

First, the old thermostats have to be replaced with the smart Alexa-compatible versions. Then you install the corresponding Alexa Skill and the heating can be controlled by Alexa voice command.

Our expert recommendation: We recommend an Echo Dot or Echo Flex as an intelligent loudspeaker. Thanks to the low price, several rooms can be equipped with it. The compatible FRITZ! DECT 301 thermostat, for example, is suitable as a smart room thermostat.

Smart lighting control by voice can also be conveniently implemented with an Amazon Echo and Alexa voice assistant. Residents can save themselves the installation of additional light switches and the associated craft costs. Overall, there are three options here. If there is no lamp connection on the ceiling, Alexa users can switch to a floor lamp that is simply connected to an Alexa-compatible WiFi socket and can thus be controlled by voice.

Our expert recommendation: Controlling the light via Alexa voice command is fun. With an Echo Flex loudspeaker and an Alexa-compatible WLAN lamp, you can get there for just a few euros. 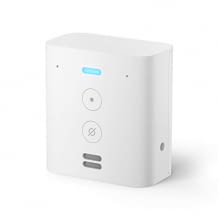 Anyone who is responsible for a baby or toddler can hand over part of their worries to Amazon Alexa and convert an Echo loudspeaker into a baby monitor. The whole thing works because the microphones of the Echo loudspeaker transmit the noises from the baby room to a smartphone or another Amazon Echo. However, parents shouldn't forget to set the volume of the smart speaker in the children's room to 0. Since the transmission works bidirectionally and the baby should not be woken up by noises.

Our expert recommendation: We recommend an Echo or Echo Dot that has at least four microphones.

Gamers who use an Amazon Echo speaker do not have to invest in additional PC speakers. PC users can simply connect the intelligent loudspeaker to their computer via Bluetooth. If the PC does not have Bluetooth, the 3.5 mm jack plug can also be used to connect the Amazon Echo and the PC. Simply use the headphone output on the PC or a USB to jack adapter.

Our expert recommendation: For good sound, we recommend the Amazon Echo, if you don't have excessive demands and just watch YouTube videos every now and then, you are already well equipped with an Echo Dot.

It can be found in almost every kitchen. The small kitchen clock that counts down and rings when the set time has expired. But sometimes the analog ones also forget the alarm at the end of the running time when the winding spring no longer has enough tension. Or the kitchen timer has disappeared into the depths of a drawer.

With an Amazon Echo, such problems are a thing of the past. In addition, Alexa has almost no time limit – even 90 minutes and more do not pose any problems for the voice assistant. Everything a chef has to do: ask Alexa with the voice command “Alexa, set timer for 90 minutes” to set a timer. Of course, the function can not only be used in the kitchen, but for all processes that are subject to a time limit.

Our expert recommendation: A small Echo Dot is perfect for the kitchen, if you also want to be guided optically through recipe instructions, you can use the Echo Show 5. 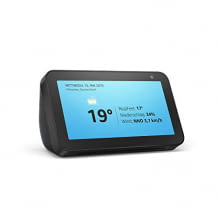 We are choosing the best wireless headphones for this Christmas