No one can ignore the stunning appearance of the Beelink GT-King Pro. It is arguably the best-looking product from Beelink.The all-metal royal blue case with a white skull on the top adds to its cool appeal. The top left corner features a raised, textured Beelink logo. Once the power is turned on, the eyes of the skull light up in a unique design. 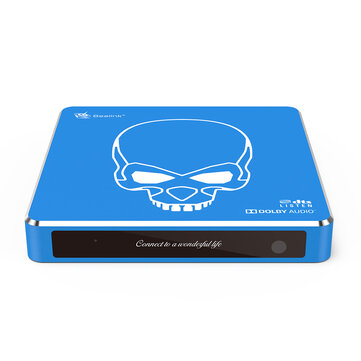 Although thin and compact, the GT-King Pro still offers a large number of ports.

The front has an IR receiver that works with a standard infrared remote control.

The left side of the box is equipped with two USB 3.0 ports to support high-speed data transmission between the set-top box and external storage. There is also a TF card slot next to the USB port.

The other ports are located on the back of the set-top box, including a power connector port, a USB 2.0 port, an HDMI 2.1 port, a Gigabit Ethernet port, a SPDIF lossless audio port, and a 3.5mm AV (RJ45) port.

The bottom of the box has four very short feet that prevent the bottom surface from becoming worn and also help with heat dissipation.

The GT-King Pro is very compact and exquisitely designed. There are no burrs or ugly mold lines, and it has a sturdy feel to it.

It’s extremely easy to set up the system. Just simply connect GT-King Pro to the TV with an HDMI cable and connect it to the power supply.

When powered on, an image of a skull with multi-colored flashing eyes will appear in the middle of the TV screen.

Bootup is super fast, with users able to enter the main interface in about ten seconds.

The GT-King Pro is equipped with Android 9.0 and features Beelink’s in-depth customizable UI. You can add your most-used apps to the right side of the homepage.

The control bar is hidden and you can drag it up from the bottom of the screen with the mouse.

In my opinion, since the box looks so cool and adopts a skull design, it would perhaps be better if the UI came in a darker style.

GT-King Pro does not have too many pre-installed apps.

In addition to the standard Android software such as Google, Play Store, Chrome, and Gallery, only Beelink’s own file manager, app market, media center, movie player and music player are available.

Finally, the most exciting thing about this product is the audio. It is well known that most TV box manufacturers often choose mid-range audio chips in order to reduce costs. As a result, when you use the TV box to play audio and video of lossless sound quality, it seems no different from ordinary videos. Or when watching some more exciting scenes in movies or games, it doesn’t seem to provide as much stimulation and there is no sense of immersion. Of course, there are some other Dolby Audio TV boxes on the market.

However, their prices will set you back. When Beelink GT-King Pro comes on the market, I’m certain it will become the most popular TV box in 2019 due to its parity, lossless sound quality, and Dolby Audio.

Beelink GT-King Pro is powered by the latest Amlogic S922X-H processor. It is currently the most powerful chip in the TV box industry, with a unit price of up to $23. This professional-grade audio chip gives life to every detail of sound.

I tested the audio with the classic war film ‘Saving Private Ryan’ to determine the sense of space and the degree of sound. And also the film ‘La La Land’ to compare the sound details.

In terms of practical experience, with ‘Saving Private Ryan’, gunshots, engine sounds, and voices could be heard clearly, and bomb explosions were particularly impressive. If your ears are sensitive enough, you would even hear the whistling sound of bullets flying through the air. This sound field creates an effect that is far from ordinary.

In the movie “La La Land”, GT-King Pro performed excellently in restoring vocal details. The low frequency is powerful. The intermediate frequency resolution and details are outstanding. And speech is smooth and well-rounded. Even the natural sense of hearing is like singing in the ear.

In the high-frequency parts, the GT-King Pro provides a wide enough range and excellent resolution, and clear and bright high-frequency audio. Moreover, the extensibility and imaging positioning ability allowed me to experience details that cannot be heard with a TV box of the same price.

Even if a symphony is performed, the GT-King Pro is sure to match high-end boxes.

At the same time, the GT-King Pro also has 4GB of RAM to support multitasking.

In the performance running test, the GT-King Pro scored above most smartphones equipped with the Snapdragon 660, and achieved almost twice the score of the Xiaomi Box 3 enhanced version, leaving other ordinary set-top boxes far behind!

In actual use, the performance of the GT-King Pro is more than enough to deal with the task of ordinary set-top boxes.

Even if the output resolution is set to 4K, there is still very little stutter or delay.

I played 1080P videos on the YouTube app and 2K videos on YouTube TV with complete ease.

Even when playing the 4K Costa Rica show on YouTube TV, there was no stutter at all.

The same is true when playing 4K videos in Chrome.

Unlike other set-top boxes, the GT-King Pro is more than just a simple streaming media player. It’s enough to run most of the 3D games found in the Google Play Store.

I tested a number of games including “Asphalt: Racing Edition”, “Real Racing 3”, “Snowboard Party” and “World Tennis: Golden Age”, all of which can run smoothly under the highest screen settings. However, in order to get a better gaming experience, a wireless controller would be essential.

Browsing the web with the GT-King Pro is also a very smooth experience.

Even if you open multiple tabs in Chrome at the same time, large pages with lots of images load very quickly, and there is no delay when switching tabs.

With a keyboard and mouse, and some suitable apps, you can even use the GT-King Pro to perform productive tasks such as sending and receiving emails, editing documents, pictures, videos, and more.

It supports 2.4GHz/5.8GHz dual-band Wi-Fi, and although there is no exposed antenna, its Wi-Fi receiving capability is still good. You can search for more wireless hotspots than the REMIX IO in the same location.

GT-King Pro’s Bluetooth chip is the Bluetooth 4.1 standard, not the latest 5.0. This is a little disappointing, but for it’s enough for a set-top box, and you can connect a Bluetooth keyboard, mouse and speaker at the same time.

The GT-King Pro can transmit audio stably with my Vifa Helsinki within 5 meters.

Of course, if the Bluetooth speaker cannot meet the requirements, the SPDIF, HDMI, and AV ports can also support most soundbars.

The HDMI interface is the latest 2.1 standard, which can output up to 4K@75FPS and is perfectly backward compatible. The three USB ports can mount up to 4TB of external storage, and the TF card slot can also support memory card expansion.

I am very satisfied with the overall performance of Beelink GT-King Pro. Compared to those ordinary boxes that can only be used as streaming media players, Beelink GT-King Pro offers obviously a better sound performance. It is more than a TV box. And it is certainly a TV box well worth buying.

Beelink GT-King Pro offers obviously a better sound performance. It is more than a TV box. And it is certainly a TV box well worth buying.