Conclusion on the Ambilight alternative from Govee in the test

Thanks to the Ambilight effect, TV fans can enjoy an immersive series experience. On the back are LEDs that extend the color of the content and shine beyond the limits of the television. However, this visual highlight is only available ex works for Philips Ambilight TVs.

The multi-colored Govee TV backlight is an inexpensive Ambilight alternative for retrofitting. The LED strip is glued to the back of the television and the colors are analyzed by a camera. The test showed that there were delays and inaccuracies. However, due to the low price of less than 70 euros, we rate this as a small weak point and recommend it to buyers, especially for those who want to save money. In addition, there are even smart advantages, such as app control or compatibility with Alexa and Google Assistant. If you want even faster light reactions, you will otherwise have to reckon with significantly higher costs. 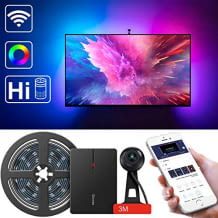 LED backlight for TV with Ambilight function. Compatible with Alexa and the Govee app.

Benefits of the Govee TV backlight

Cons of the Govee TV backlight

The Govee LED TV backlight is suitable for TVs between 55 and 65 inches. The scope of delivery includes an LED strip that can shine in more than 16 million colors, a power plug, brackets, a camera and a box with which the LED strip is connected to the camera and power.

Govee TV backlight in the test – special features and functions

If you want to retrofit the popular Ambilight effect cheaply, you can't go wrong with the TV backlight from Govee. After all, an original Philips Ambilight TV is significantly more expensive and an existing TV does not need to be replaced. The price for other retrofitting options can also quickly exceed 100 euros.

In contrast to a conventional light strip, which can also be attached to the back of the television, the difficulty is that an Ambilight alternative not only has to shine in several colors other than white, but also at the same time. In addition, synchronization with the TV picture must take place.

With Govee this works with the help of a camera that is attached to the top of the television. It analyzes the content of the TV and sends this information to the LED strip. If there is sea on the side of the film scene, the stripe there glows blue, for example, while the beach area on the left has been expanded with brown shades. We found it took some getting used to in the test that a camera has to be permanently visible on the TV for the Ambilight effect. Anyone who is worried about their privacy can feel like they are being watched. 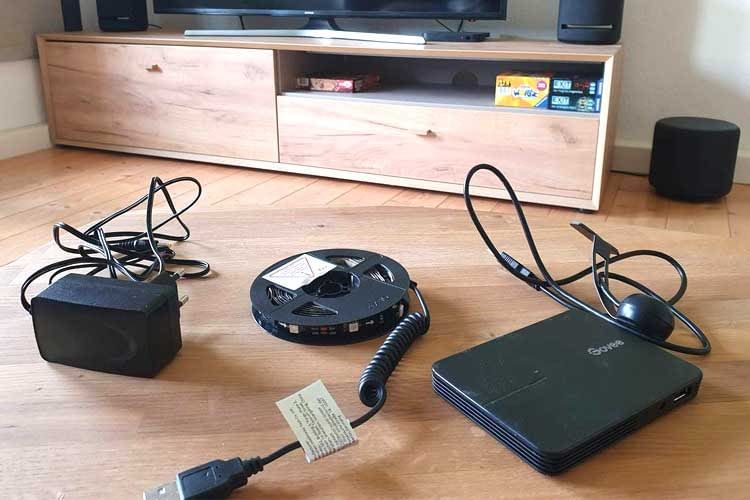 The scope of delivery of the Govee TV backlight includes e.g. B. an LED strip, a box, power cord and a camera

There are delays in displaying the color tones, which can be noticeable when changing scenes quickly during a film or series, as it takes some time for the camera and light strip to work together. In our Govee TV backlight test, this was particularly noticeable in the fact that color tones were not quite hit or the light strip reacted to color images with a significant delay. However, strong latencies must be compensated for by precisely calibrating the camera.

If you want a real home theater feeling, you shouldn't expect too much from the Govee TV backlight. The differences to the precision of an original Philips Ambilight TV are clearly noticeable. But at the low price, that's perfectly fine in our opinion. Govee always offers an immersive television experience. Interested parties have to invest significantly more for the original or a comparable alternative.

Dimmable: While watching TV, users can adjust the light according to the environment. This means that you can make the Govee TV backlight brighter in daylight and darker in the evening. When the TV is switched off, varying the brightness ensures a relaxed atmosphere.Smart Home: Thanks to the compatibility with Alexa and Google Assistant, the Govee TV background lighting can be integrated into your own smart home and switched on, off or dimmed, for example, by voice command. Music mode: A microphone is also integrated in the camera so that the Govee LED Lightstrip also reacts to acoustic sounds and lights up accordingly. That makes recording a live concert, for example, a very special entertainment moment.

Install and set up the Govee TV backlight

In the Govee TV backlight test, the installation turned out to be a bit difficult when it came to gluing the LED strip to the back of the TV. After that, however, we were convinced by the good hold and the calibration of the camera also worked without any problems in the test.

There are just 5 steps to installing the Govee TV backlight:

Note: The manufacturer recommends the Govee TV backlight for devices between 55 and 65 inches. In the test we used a 55 inch television. In this case, the light strip is sufficient for the left, upper and lower side. The lower edge is not pasted, which is particularly important for users who have their TV mounted on the wall. In our case, the TV was on a side board, so we didn't miss this aspect.

What is compatible with the Ambilight alternative Govee TV backlight?

The Govee TV backlight is compatible with Alexa and Google Assistant.

In further tests, the low price of the Ambilight alternative from Govee was also mentioned.

After their Govee TV test as an Ambilight alternative, the gamerspotion.de testers were satisfied. The installation was easy and for the low price the compromises in color accuracy are justifiable. However, the camera on the TV set takes getting used to. (Status: 11/2019) Customers on Amazon rated the TV Ambilight light strip from Govee with a good four out of a total of five stars. (Status: 05/2021) The Stiftung Warentest has not yet tested the Govee TV backlight. (As of: 05/2021)

If you are looking for a retrofit solution for the Ambilight effect that is more accurate in terms of color reproduction and has fewer delays than Govee TV background lighting, we recommend the Philips Hue Play Gradient Lightstrip.

However, this option also has its price, as the colors of the TV picture are not analyzed via the camera, but are technically connected to the HDMI playback devices with the help of the additionally required Philips Hue HDMI bridge. If not already available, a Philips Hue bridge is also required as the heart of the Philips Hue lighting system so that the installation works perfectly. The Philips Hue Play Gradient Lightstrip is available in three different sizes and is best suited for the following TV sizes: 55, 65 and 75 inches. 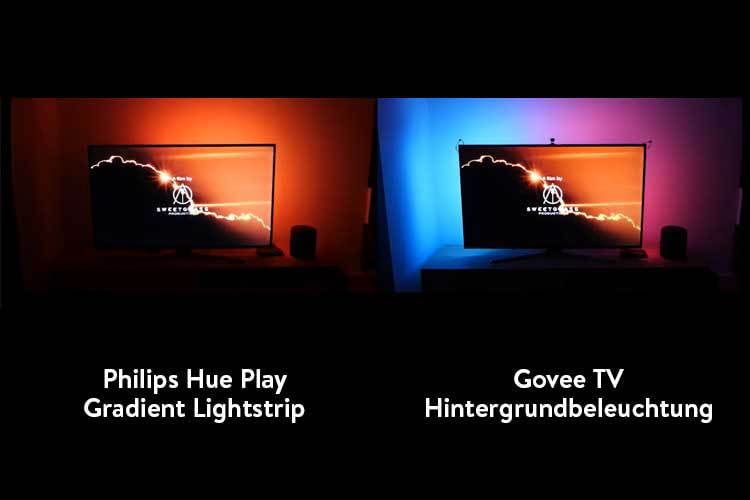 In a direct comparison, we were able to compare both variants in the test and we noticed significant differences in quality. If you want to get close to the synchronicity of the Ambilight effect of the original, you should opt for Philips Hue Play Gradient, but you have to be prepared to pay the typically expensive price for it. 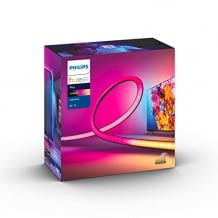 Smart Lightstrip for innovative surround lighting that adapts to the respective film sequence. For impressive effects.

OnePlus Co-Founder: Apple isn't nearly as innovative as it used to be