Some more mobile Samsung devices are currently getting the October update. We tick: the Galaxy Tab S7 and both variants of the Galaxy S20 FE 4G.

It's kind of a recurring comment with every update that rolls out for the Galaxy Tab S7. Officially, Samsung's top model tablets receive a new security patch every quarter. But in 2021, they've already received eight updates so far — including today's. That's more than an update every two months, and almost one a month, on average.

Firmware versions T87*XXU2BUJ3 (Tab S7) and T97*XXU2BUJ3 (Tab S7+) are rolling out in the form of a 300MB download. Roughly speaking, the new software brings two improvements – one of which, of course, is the October patch.

The other is the improved 'overall stability of your device'. Information-technically, this description again leaves something to be desired, but we assume that things are being improved behind the scenes that needed to be improved.

You can now download the update directly OTA on all Tab S7 and Tab S7+ models – whether you own a Wi-Fi or 5G variant. 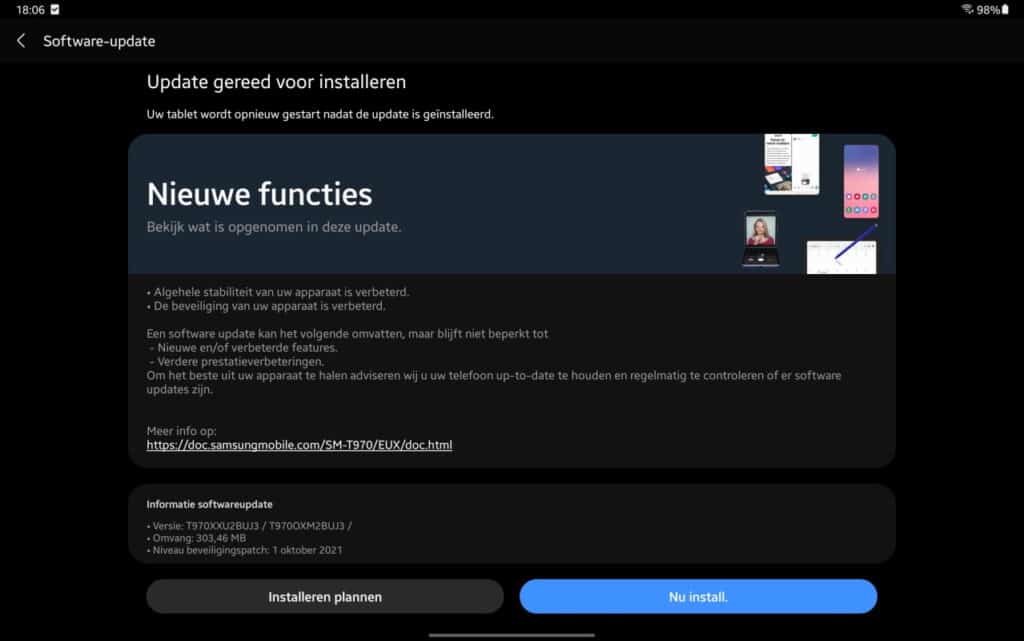 Samsung previously rolled out the October update for the regular Galaxy S20 series and for the S20 FE 5G. The only devices in the S20 series that did not receive a new patch so far were both 4G models of the S20 FE.

For the SM-G780F, the update does not contain any concrete changes – only the October patch will be installed. The update of the SM-G780G should contain changes that go beyond the latest security patch. However, we cannot yet check which one exactly.

Do you have the S20 FE 4G with Qualcomm processor (SM-G780G) and will you see more information before installation? Then let us know below!

The update is now available on all versions of the Galaxy S20 FE sold in the Netherlands and Belgium. You can wait until you receive a notification automatically, or you can go directly via Settings to Software update, and tap Software updates there.

Have you received any of the above updates, and are you encountering more changes?

(Thanks Mark and Yoran!)