Only today! eero WiFi mesh router on offer at MediaMarkt

Only today in the MediaMarkt offer: eero 6 WiFi mesh router with WiFi 6

Streaming interruptions and slow internet? Often it is due to the outdated wireless router. If you want to renew your WiFi home network, you should consider the MediaMarkt offer for the dual-band WiFi mesh router eero 6. The two great features of the router: It is mesh-capable and supports WiFi 6.Mesh-capable means that the WiFi router is also the heart of a future mesh system, in which the WiFi home network can be expanded with additional signal amplifiers at any time. Wi-Fi 6 manages data streams more efficiently and can use the 2.4 and 5 GHz WLAN frequency band at the same time, which ensures more stable connections and high data throughputs. 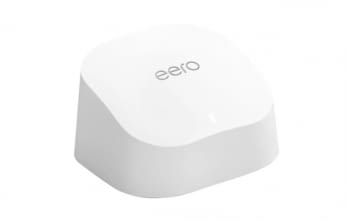 Dual band mesh WiFi 6 system with integrated ZigBee Smart Home Hub. For a coverage of up to 140 sqm and support of up to 900 Mbit / s. Ideal for the smart home. Get it now for 149 euros at MediaMarkt!

The eero 6 dual-band WiFi mesh router covers an area of ​​up to 140 square meters with a maximum data throughput of up to 900 Mbit / s. These are very good values, but users should keep in mind that walls, ceilings and other obstacles can reduce the range and data throughput.

Thanks to Wi-Fi 6 support, users can operate up to 75 devices in their home Wi-Fi network. This means that even households with several users and many Internet-enabled devices are well equipped for the future. The setup is simple and basically follows the following 4 steps:

Another extra is an integrated ZigBee hub. For example, if you use the voice assistant Alexa, you can transform your home into a smart home with compatible devices that use the Zigbee smart home radio standard. The radio standards Thread and Bluetooth Low Energy 5.0 are also integrated.

If you live in a larger apartment or want to provide an entire house with WiFi, you can save with the eero dual-band Wi-Fi 6 mesh system. The package consists of a Wi-Fi 6 mesh router and two signal amplifiers. The router supports speeds of up to 500 Mbit / s, together with the two Wi-Fi 6 WiFi mesh signal amplifiers, users can supply areas of up to 460 square meters with WiFi internet. 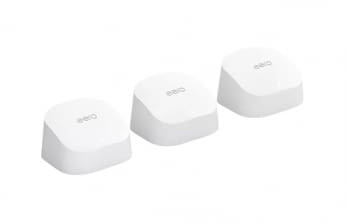 Dual band mesh WiFi 6 system with integrated ZigBee Smart Home Hub. Thanks to the 3-pack for a coverage of up to 460 sqm and support of up to 500 Mbit / s. Ideal for the smart home. Get it now for 299 euros at MediaMarkt!

The big difference between a mesh system and ordinary WiFi routers and WiFi repeaters is that the devices combine to form a single large WiFi home network and appear under a uniform network name. The devices “mesh” and the data always look for the most optimal route to the end device. Conventional WLAN repeaters always open their own network with their own name. This can lead to problems if devices have to be in the same home network. This is the case, for example, when installing smart home devices such as a WLAN socket. Here, the WiFi adapter plug and the smartphone with the device app must be in the same home network.

Of course, a ZigBee hub is also integrated in the router in the eero WiFi Mesh System Set and the wireless standards Thread and Bluetooth 5.0 Low Energy are supported, which makes the system ideal for smart home use.

A complete WiFi mesh system is not always required. Often the need only increases when the children get older and use their own Internet devices or when the room distribution changes. So if you don't know what the future will bring, you should start with the eero dual-band Wi-Fi 6 mesh router and then gradually expand the home Wi-Fi network with individual signal amplifiers. An eero signal amplifier increases the coverage by up to 140 square meters.

Dual band mesh WiFi 6 signal booster to expand an existing eero network. For additional coverage of up to 140 sqm. Simply set up and prevent connection interruptions. Get it now for 109 euros at MediaMarkt.

ZigBee wireless standard only for the eero Wi-Fi 6 mesh router?

ZigBee is an energy-saving smart home wireless standard. Zigbee is one of the so-called mesh radio standards, which means that devices with a Zigbee radio chip also take on repeater functions and set up their own radio network. It is therefore sufficient that only the eero Wi-Fi 6 mesh router has an integrated Zigbee hub.

Is the eero Wi-Fi 6 Mesh system suitable for smart homes?

The eero Wi-Fi 6 mesh system is a great choice for smart homes. The system offers two major advantages for smart home devices: On the one hand, the mesh technology, from which older devices also benefit, and, on the other hand, the Wi-Fi 6 technology, which can manage a large number of devices in the home network.

In order for the Wi-Fi 6 radio standard to develop its full potential, both the WLAN router and the WLAN end devices must support Wi-Fi 6. The eero Wi-Fi 6 Mesh System also supports devices without Wi-Fi 6.