It is well known that Alexa's name can be changed. Then the voice assistant from Amazon reacts alternatively to her name z. B. on "Echo" or "Computer". However, Alexa can also recognize individual noises as an activation password. The choices are dog barking, a crying baby, coughing, and snoring. (As of: 09/2021).

However, the noises are not a conventional activation word, but can only activate a routine. A routine is an individually created if-then sequence. Thanks to the function, a conceivable scenario is, for example, that a parent is notified when the baby is crying in the nursery and Alexa replaces a baby monitor. We show which steps are necessary for Alexa sound detection.

Set up Alexa sound detection – that's how it works

Creating an Alexa routine in which Alexa recognizes different noises can be done in nine simple steps. For this, users only need the Alexa app (Android | iOS) and an Amazon Echo.

Open the Alexa app Click on “More” at the bottom right, select “Routines”, name the routine and tap “Noise detection” for “If the following happens” For routine, choose which Eco device should react to it. In the settings of the routine, set the days and period during which the Echo loudspeaker should react to the noise and perform an action. Select the action that should be triggered with the noise. For example, that Alexa says a certain sentence or compatible devices switch on.

The noise detection was so good in the test

We tried the noise detection. In our test we decided and for “dog barking” as the sound that the Echo loudspeaker should perceive. We tested the routine with an Amazon Echo 4. As an if-then sequence, we selected a sentence from Alexa as the action. To do this, we first tapped on "Add an action", "Alexa says", "Sentences", "Compliments" and finally on "You are a great friend" in the Alexa app. 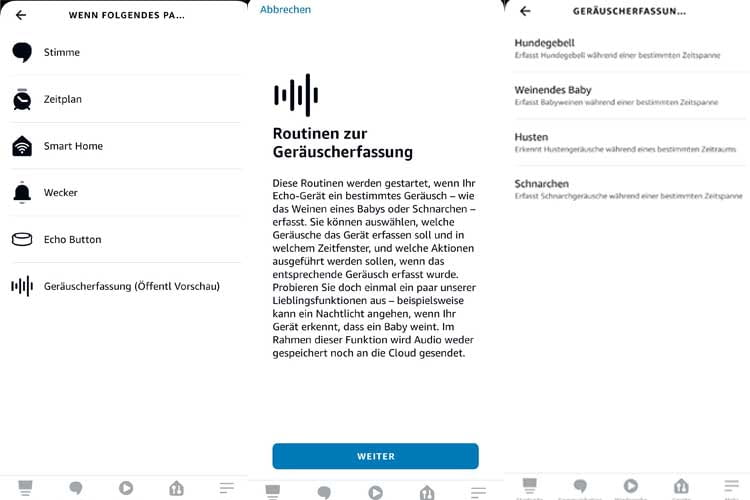 As a dog replacement, we played dog barks on YouTube. Alexa did not always react directly to this, but after a few barking noises, she responded as requested with the selected sentence "You are a great friend".

We rate the fact that Alexa can react to different noises as a practical development. We were reminded of the Alexa Guard function, which is not yet available in Germany (as of 09/2021). With this function, the Amazon Echo loudspeaker detects the clinking of windows, for example, and informs residents of a possible break-in and acts as a kind of alarm system.

With the advent of Focus mode in iOS 15, an important Do Not Disturb feature has disappeared