The best Stiftung Warentest soundbars in the test check and comparison

In the following, we present the two soundbars that Stiftung Warentest has rated as “good”, as well as a cheaper soundbar alternative that we recommend.

The JBL Bar 5.0 Multibeam is a 2.1 channel system with WLAN support and can therefore also stream high-resolution music. As the only soundbar in this comparison, it also offers an eARC interface and is therefore able to support high-resolution Dolby Atmos 3D sound. In addition, the Stiftung Warentest-Sieger is also suitable for use with a Blu-ray player thanks to 4K and Dolby Vision support. 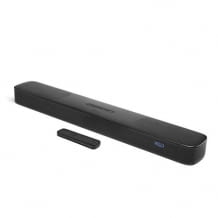 The Samsung HW Q60T soundbar is a bit older, but still impresses with its inner values. The sound bar is currently offered very cheaply and also supports 4K resolution for operation with Blu-ray player and HDR +. Compared to the JBL Bar 5.0, Dolby Atmos is not supported and the HDMI eARC interface is missing, but there is a 5.1 channel system with subwoofer. 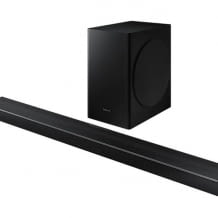 The Teufel Cinebar 11 soundbar was also rated “good” by Stiftung Warentest. The 2.1-channel system is supplied with a subwoofer and, like the JBL Bar 5.0 Multibeam, also supports 4K content with Dolby Vision transmitted from a Blu-ray player the soundbar can be passed on to the TV. WLAN or Dolby Atmos is not supported, but high-quality Bluetooth audio streaming with aptX. 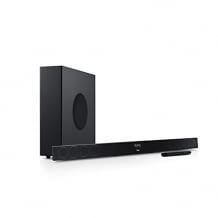 If you have little space and like to stream music, the Teufel Cinebar One + Soundbar is a small and fine alternative to the Cinebar 11. It is only a 1-way system, but with a subwoofer it has plenty of power. Thanks to Teufel's Dynamore technology, the small Cinebar also develops spatial sound and turns out to be a high-quality all-rounder and aptX Bluetooth speaker. A CD player can be connected via an optical input. 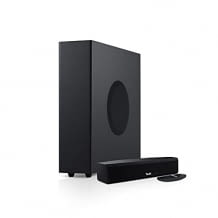 If you only look at the RRP of the soundbars, the JBL Bar 5.0 Multibeam is the first choice. However, there are already models on the market that are around 100 euros cheaper. The HW Q60T soundbar offers a good alternative if you can do without Dolby Atmos and WLAN. The same applies to the Teufel Cinebar 11 soundbar. If you have limited space, you can use the Teufel Cinebar One + as an alternative, which has the same subwoofer as the larger model. (As of: 12/2021)

This is how our soundbar rating came about

Stiftung Warentest repeatedly tests popular groups of technical devices. Often, however, it depends on the point of view which criteria are considered to be particularly important. In the case of a soundbar, at first glance this is clearly the sound. But here, too, there are differences: while movie buffs may attach particular importance to Dolby Atmos support, ambitious movie fans are often satisfied with good surround sound. Other users have little space and are looking for a soundbar that can also be used as a music system. Series fans may just want to improve their TV sound and are looking for a device that can also serve as a Bluetooth player.

So it is not always easy to consider all perspectives and recommend the right device. In our comparison, we from Stiftung Warentest looked at devices rated “good” from our 360-degree perspective and suggested cheaper alternatives. Ultimately, of course, it is up to the consumer's personal demands which device is best for him.

As already mentioned, it always depends on personal requirements which soundbar is the right one. The following criteria should help you find the right device.

Dolby Atmos 3D sound: Moviegoers love 3D sound, in which sound objects can be freely positioned in the room. So z. B. the impression that a locomotive is moving from the rear left in the room to the front right. The Dolby Atmos sound format is popular in the film industry. The disadvantage: The format is very data-intensive and mostly uncompressed. An eARC HDMI interface is required to be able to transmit the information.

Bluetooth streaming: Many music lovers use music streaming services such as Spotify or Amazon Music Unlimited. The playlists can then be streamed from the smartphone app to the Bluetooth headphones or Bluetooth speakers via the Bluetooth interface. Almost all soundbars now support Bluetooth. But here, too, there are differences in the coding. Particularly high-quality Bluetooth audio is provided by devices with aptX support, with which the compressed music transmission experiences little loss.

WiFi streaming: Compared to Bluetooth streaming, WiFi streaming offers a much larger data bandwidth, which is why WiFi speakers usually sound better than Bluetooth speakers. In addition, some WLAN loudspeakers can also be integrated into a loudspeaker multiroom environment. This means that a music stream can be played on several speakers in the house at the same time – to the delight of many party-goers.

Conclusion: With its soundbar JBL Bar 5.0 Multibeam, JBL has brought a cutting-edge sound bar onto the market whose functions set a benchmark in the mid-range segment. The competition has to be measured against this device. If you want to buy the soundbar, you have to be quick because the model is regularly sold out. (As of: 12/2021)

Advantages of the JBL Bar 5.0 Multibeam

Disadvantages of the JBL Bar 5.0 Multibeam

The JBL Bar 5.0 Multibeam soundbar has two special features among the devices considered in our comparison. On the one hand, the integrated Virtual Dolby Atmos. In this way, the soundbar simulates the 3D sound and creates a wide surround sound. Normally around 7 loudspeakers are required for real Dolby Atmos, i.e. a 5.1 system plus two speakers that emit the sound upwards and can thus imitate this 3D effect. Although no subwoofer is included in the scope of delivery of the JBL Bar 5.0 Multibeam, four passive membranes are integrated in the sound bar, which can certainly build up bass pressure – here the company can benefit from the experience with its JBL Bluetooth speakers. 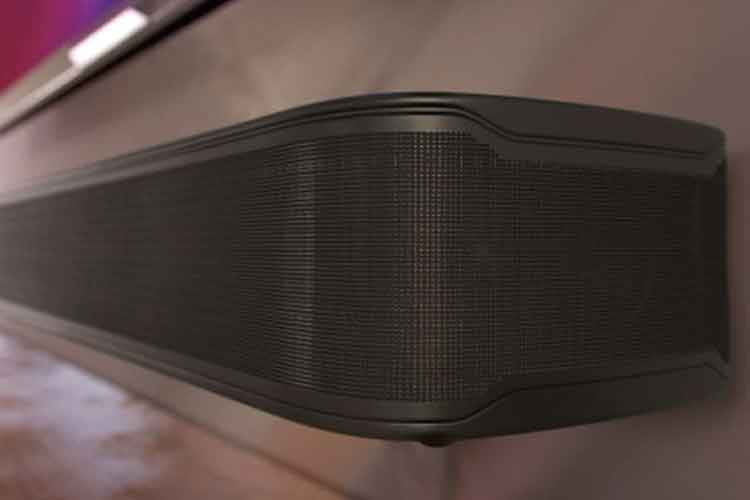 JBL Bar 5.0 Multibeam is not only fun in terms of sound, it also cuts a fine figure on the wall

Another special feature is the WLAN integrated in the soundbar in connection with Google Chromecast, Apple Airplay and Alexa multi-room music function (MRM). This means that users of the Siri, Alexa or Google Assistant voice assistants can stream their connected music streaming service to the sound bar via WLAN. In addition, the bar can be integrated into an Alexa-compatible multiroom loudspeaker environment. Those who do not use a voice assistant can also stream their playlists to the soundbar via a Bluetooth-enabled device.

Conclusion: The Samsung HW Q60T soundbar can call itself a tried and tested evergreen. The soundbar is still compact and offers a very good price-performance ratio. Those who like to stream films and series will get a lot of soundbar technology for their money.

Advantages of the Samsung HW Q60T

The Samsung HW Q60T has been on the market for some time. Compared to the JBL Bar 5.0 Multibeam, however, this soundbar does not offer any support for virtual Dolby Atmos, as the device lacks the necessary HDMI eARC interface. However, if you mainly stream films, you will not find this to be a major shortcoming, because most streaming content uses the Dolby Digital audio format, which supports 5.1 surround sound. 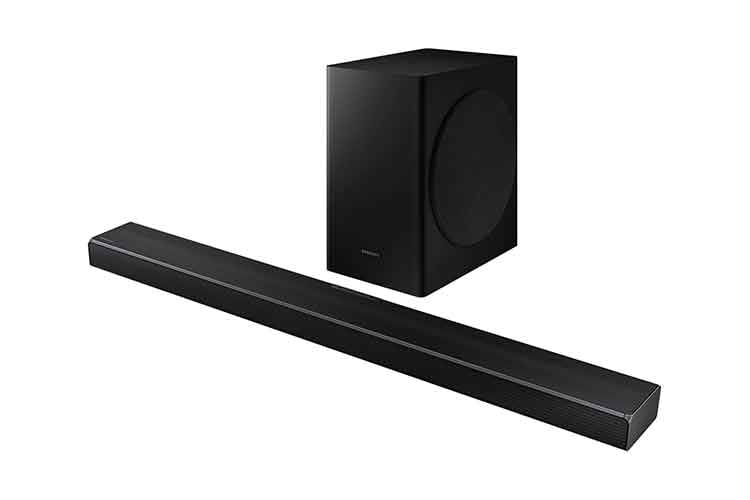 If you look at the inner values ​​of the Samsung HWQ60T, the soundbar is still up-to-date. The system pushes a maximum of 360 watts of sound output into the living room environment. In contrast to the JBL Bar 5.0 Multibeam, a subwoofer is also included in the package. Music streamers can stream their playlists to the device via Bluetooth.

With a length of almost 60 centimeters, the Samsung HWQ60T can also be considered compact. Who z. B. has a 32 inch TV on the Ikea IVAR shelf, does not have any problems with a shelf width of 70 centimeters.

Conclusion: Anyone looking for a sophisticated soundbar with good sound properties will make a good choice with the Teufel Cinebar 11. Thanks to the included subwoofer, bass fans will also get their money's worth. Bluetooth with aptX ensures high-quality streaming sound.

Advantages of the Teufel Cinebar 11

Disadvantages of the Teufel Cinebar 11

The Teufel Cinebar 11 is a sophisticated soundbar that, thanks to Teufel's Dynamore technology, conjures up virtual surround sound in the room. In contrast to the JBL Bar 5.0 Multibeam, the Teufel Cinebar does not support WLAN, which is a shame. Music fans can stream their sound selection to the sound bar via Bluetooth. AptX support ensures good sound. However, the source device, such as B. the smartphone be aptX-capable. 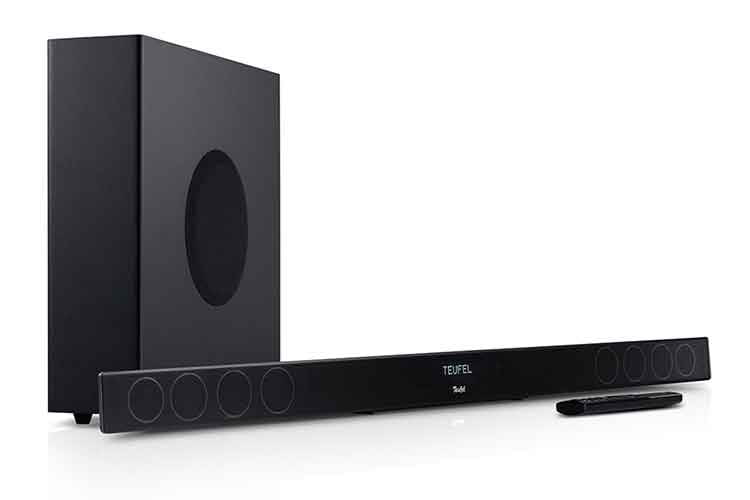 Teufels T6 subwoofer is included in the scope of delivery. In contrast to other subwoofers, this has a special feature: it can be used lying down or standing up. So if you don't have a lot of space, you can easily place the subwoofer lying under the couch. As expected from the loudspeaker professionals, the device setup is very successful.

Teufel Soundbar Cinebar 11 in all important tests and evaluations

In the Teufel Soundbar Cinebar 11 Soundbar Test by computerbild.de, the device achieved the test grade “good” (2.4). (Status: 04/2021) After testing the Teufel Cinebar 11 soundbar, the editors of gameswelt.de titled their conclusion “Strong soundbar at a fair price” and made a purchase recommendation. (Status: 07/2021) The renowned Stiftung Warentest awarded the test grade “good” (2.4) in its soundbar comparison test in issue 08/2021.

Price and best offers for the Teufel Cinebar 11 soundbar (2021)

Soundbar Teufel Cinebar One + in the editorial rating

Conclusion: The Teufel Cinebar One + offers an excellent price-performance ratio and is the first choice for everyone who has limited space and is looking for a compact soundbar that is also suitable for playing music. It improves TV sound, can be used as a high-quality Bluetooth speaker and, thanks to the integrated sound card, can be linked to the computer. The plus in the name stands for the Teufel T6 subwoofer. Users should make sure to purchase the updated version from 2021. (As of: 12/2021)

Advantages of the Teufel Cinebar One +

Disadvantages of the Teufel Cinebar One +

Those who cannot or cannot afford the Teufel Cinebar 11 will find an inexpensive alternative in the smaller Teufel Cinebar One +. The soundbar impresses with a powerful music performance for its size. 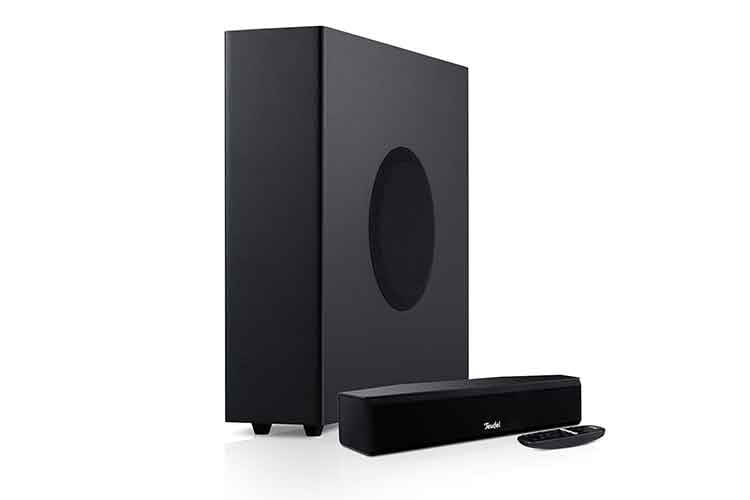 As with the Cinebar 11, Teufel's Dynamore technology is responsible for the surround sound. Although the mini soundbar cannot keep up with its big brother when it comes to surround sound, buyers receive a real power pack that also includes Teufel's T6 subwoofer. The aptX function for high-quality Bluetooth streaming is also not missing. A special extra of the Teufel Cienbar One + is the integrated sound card, so that the soundbar can also be used as a sound system for the computer.

Important soundbar tests and ratings for Teufel Cinebar One +

What are the best Stiftung Warentest soundbars?

Stiftung Warentest tested 20 soundbars in 2021. Only two models were able to achieve the top grade “good”, all other models only received the test grade “satisfactory” or worse. In addition to the test criterion “sound”, “handling” and “power consumption” were also included in the final score. Curious: The “data protection” criterion was also examined, but had no influence on the final score. (As of: 12/2021)

What are the best sound bars?

In our large soundbar test comparison, we recommend the following models:

What does a good soundbar cost?

Good sound doesn't have to be expensive. Good soundbars are available from around 150 euros. There are hardly any upper limits. (As of: 12/2021)

Which soundbar is recommended?

A soundbar recommendation always depends on the personal preferences of the user. If you are looking for an inexpensive all-rounder that enhances TV sound and is well suited for music streaming, we recommend the Teufel Cinebar One + (model 2021). We recommend the Samsung Soundbar HW-Q60T or the smart Sonos Beam (Gen. 2) to movie buffs. (As of: 12/2021)

When did Stiftung Warentest test soundbars?

The last soundbar test by Stiftung Warentest was published in the magazine issue 8/2021. The booklet can be ordered as a PDF version for 5.99 euros.