These are the best test models

More and more users are getting smart help in their own four walls when it comes to household chores. That is why vacuum robots in particular are enjoying growing popularity. Stiftung Warentest has also noticed this and has been putting various devices to the test for several years. In addition to robotic vacuum cleaners, which were recently tested by Stiftung Warentest in December 2020, there are also tests of pure mopping robots and hybrids that can vacuum and mop. We show which models emerged as test winners, which recommendations the Stiftung Warentest makes and what the criteria were in the test.

Roxxter Series 6 from Bosch came out as the test winner of the Stiftung Warentest robot vacuum cleaner with an overall rating of “Good” (status: 12/2020). In the sub-area “vacuuming carpets”, the vacuum robot even received the rating “very good” from Stiftung Warentest. The robust brush reliably removed dust and fibers from carpeting. On hard floors, however, the cleaning behavior was described as "loud".

IRobot Roomba i7158 was able to secure second place in the vacuum robot test of Stiftung Warentest (status: 12/2020). The experts gave the rating “good”, which was also confirmed in the sub-areas relating to vacuuming hard floors, navigation, handling and environmental properties with the rating “good”. iRobot Roomba i7158 is easy to use on the device but can also be operated via the app, according to the testers. The Stiftung Warentest, however, saw weaknesses in carpet cleaning at edges and corners.

Conclusion: Stiftung Warentest was satisfied after their vacuum robot test and described the iRobot vacuum robot as "the best on hard floors". However, disadvantages were that the dust container is difficult to clean and the follow-up costs can be expensive.

Neato Botvac Connected D7 came in third in the robot vacuum test by Stiftung Warentest. Overall, a good vacuum robot, judged the experts. Also rated “Good” in the following sub-areas: vacuuming hard floors, endurance test with hair and navigation. The data transmission behavior of the app was described as critical by the Stiftung Warentest.

Like the test winner Bosch Roxxter Series 6, Neato Botvac Connected D7 does not have a typical circular device shape, but a U-design. This means that one side is rounded and the other side is straight.

Conclusion: Unique selling point according to Stiftung Warentest: widest brush in the vacuum robot test. (As of: 12/2020)

Which vacuum robots has Stiftung Warentest tested in total?

The Stiftung Warentest has carried out several robot vacuum tests so far. Most recently in spring 2019 and the current test took place at the turn of the year in December 2020. In the following we show an overview of all tested models.

In December 2020, Stiftung Warentest tested a total of 12 vacuum robots. Three models received the grade “good”. Seven suction robots were rated “satisfactory” by the experts. Two devices landed in the rear with the grade “sufficient”.

Evaluation criteria were: vacuuming hard floors, vacuuming carpets, endurance test with hair, navigation, handling, environmental properties and data transmission behavior of the app. The models and results at a glance:

In March 2019, Stiftung Warentest tested a total of 8 vacuum robots. The criteria at the time of the test were: cleaning, navigation, handling, environmental properties and data transmission behavior of the app. Two models were rated “Good”, five models were rated “Satisfactory” and one model was rated “Sufficient”. The vacuum robots and reviews at a glance:

In addition to the pure vacuum robots already mentioned, Stiftung Warentest has also rated devices that can vacuum and wipe. Vacuum and floor mopping robots are usually characterized by the fact that the mop function has so far been understood as a nice extra. This means that the smart helpers are not yet able to completely replace manual wiping and are more used for basic cleaning. This weak point was reflected in the evaluation of the Stiftung Warentest: Even the test winner Ecovacs Deebot Ozmo 930 only received the grade "satisfactory". (Status: 01/2020)

The best combination device comes from ECOVACS, but still only achieved the grade 3.1. (Test time: 01/2020). Stiftung Warentest justified this with the fact that Deebot Ozmo 930 cleaned carpets and hard floors reliably, but failed because of dried mustard. In the test, however, this hybrid overcame thresholds of up to 2 centimeters in height and works unusually quietly.

Conclusion: received a very good rating in terms of security, but still has room for improvement, especially in the wipe mode. 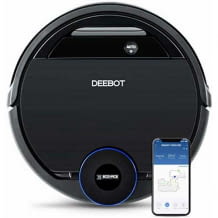 Xiaomi Roborock S6 in the test of the Stiftung Warentest

The operation of the second-placed Roborock S6 is particularly easy, as our S6 practical test shows. So it's no wonder that in the Stiftung Warentest category “Handling” he even outperformed the test winner with a grade of 2.3, which only achieved a test grade of 2.8.

Our positive experience with cleaning was also confirmed by the Stiftung Warentest experts, who certified the Roborock S6 with good navigation and little dust release into the environment. They also referred to his quiet way of working. Overall, this model was only given a grade of satisfactory (3.5), as this hybrid also failed the mustard test and the app showed critical data transmission behavior.

Conclusion: Convincing middle class model with a very good price-performance ratio. However, if you have data protection concerns, you should better choose the test winner. 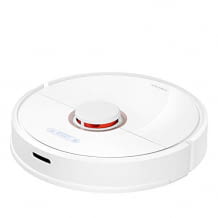 Cheaper alternative to the test winner and runner-up: Zaco A9s

With a grade of 3.9, the inexpensive Zaco A9s barely made it into the three best hybrid models, but showed some weaknesses that interested parties should consider before buying. Because during the test by Stiftung Warentest, it navigated incomplete, did not remove mustard reliably and released a comparatively large amount of sucked dust back into the environment. But at least it gets under low furniture and works quietly. Apart from that, the Zaco A9s received the grade very good (1.0) in the security category. (Test time: 01/2020)

Conclusion: We think there are significantly better hybrid models than this and recommend either choosing the first or second-placed hybrid model or buying a good device that has not yet been discovered and rated by Stiftung Warentest. For example eufy RoboVac L70 Hybrid. 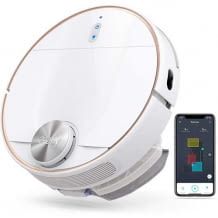 Which vacuum and floor mopping robots has Stiftung Warentest tested?

So far, Stiftung Warentest has tested combination devices in January 2020. The test criteria were: vacuuming, wiping, navigation, handling, environmental properties, security and data transmission behavior. A total of five vacuum and floor mopping robots were taken into account, all of which were only rated “Satisfactory” or “Sufficient” – no hybrid scored “Good” or “Very Good”. The results at a glance:

The Stiftung Warentest has so far only tested two pure mopping robots. That was in January 2020. Similar to the hybrid models, no device was able to prove itself with the test grade “very good” or “good”. Both models included in the test were only rated “satisfactory”. The criteria were: swiping, navigation, handling, environmental properties, security, data transmission behavior.

IRobot Braava jet m6 emerged as the wiper robot test winner of Stiftung Warentest (status: 01/2020). The testers positively noticed that the iRobot Braava jet m6 had no problem fitting under low furniture due to its dimensions. A plus point that corresponds to the experience of our test impressions. Practical: Braava jet m6 works quietly and with a spray jet. A unique selling point, as comparable models only moisten a cloth.

Conclusion: When evaluating the iRobot Braava jet m6, the Stiftung Warentest came to the conclusion that the mopping robot wipes well. The experts gave the rating “satisfactory” instead of “good” with safety concerns about a cable near the charging station. It is not adequately secured and there is "a risk of electric shock, albeit a small one." 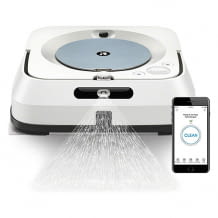 In the mopping robot test by Stiftung Warentest, Moneual Everybot RS700, like iRobot Braava jet m6, only received the grade “satisfactory” and achieved second place (status: 01/2020). According to the testers, Everybot worked at an intense volume. The experts described the wiping performance as “decent”, but the wiping robot failed in the test e.g. B. on dried mustard. Another weak point was that the mini-tanks had to be refilled frequently, as they quickly used up the water during cleaning. In the “mopping” sub-area, the Moneual mopping robot performed best in its test by Stiftung Warentest, where it was rated 1.9.