Invited by the Covid-19 pandemic under the hashtag “WirBleibenZuhause”, we all spend a lot more time in our own four walls. The result: the home receives more attention than before and is being put to the test. For many, this is the perfect time to make their home smarter. No wonder that the field of smart home providers is constantly expanding. But which manufacturers do Germans spend their money on?

More and more consumers in Germany are relying on smart home solutions. As a survey conducted by OnePoll by reichelt elektronik in December 2020 shows, one reason for this is the increase in the feel-good factor in one's own four walls. According to this, 51 percent state that smart lighting control is particularly important and is used for precisely this reason.

A traditional manufacturer of electrical appliances was convincing among the survey participants: 70 percent say they are satisfied with Philips and almost half of them are even very satisfied. The brand is popular with all age groups.

In second place, the furniture manufacturer Ikea stands out from the other brands. The company has also been active in the smart home sector for a number of years and that is paying off: 57 percent of those surveyed are satisfied with the lighting control from Ikea. The products of the Scandinavian furniture store are particularly popular with the target group up to 35 years of age.

FRITZ! DECT as a popular all-rounder

The manufacturer AVM scores particularly well in both the energy control and switch actuators category. 56 percent of those surveyed are satisfied with its products for monitoring and controlling energy consumption, such as intelligent heating thermostats and sockets. Even with the switch actuators from the Berlin company, over half (55%) of the users have no complaints.

In addition, as a comprehensive home network with control via a FRITZ! Box as the basis, FRITZ! DECT is the product of choice for 56 percent of those surveyed, putting it ahead of the smart home systems from Bosch (54%). A previously unknown manufacturer of switch actuators, lighting controls and smart home systems is Shelly. Almost half of the respondents in all three areas (46% each) stated that they did not know or use the brand, but they scored with a satisfaction rate of up to 38 percent.

The Magenta energy controls from Deutsche Telekom are also satisfied with half of the users, and almost a third are even very satisfied with the devices. The French manufacturer Netatmo is still relatively unknown on the German market. 47 percent stated that they did not know or use the company's heating thermostats. In its home country, on the other hand, the manufacturer made it to second place with 31 percent and only had to admit defeat to Xiaomi (48%). 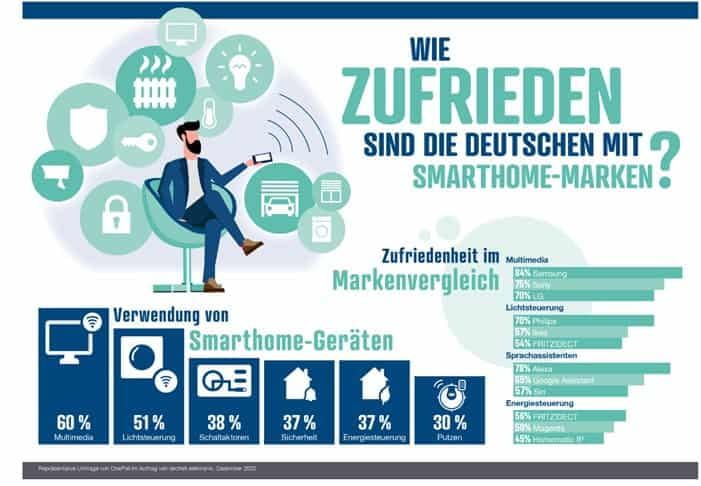 "Alexa, who is my favorite when it comes to voice control?"

There is also no big surprise with the most popular voice assistants. When it comes to satisfaction, the clear favorite is Amazon's Alexa (78%), ahead of the Google voice assistant (65%). It is particularly noticeable here that over 50 percent of the users stated that they are very satisfied. At 37 percent, Google only made up a third of those surveyed.

Customers look at the price first

A general result of the survey was that the price is a clear purchase criterion for most customers: over two thirds of the participants say that the price (66%) is more important than the compatibility with other products or systems (64%). Another 41 percent say that they decided against buying a smart home device because it was too expensive for them.

If you consider that the established brands came out on top in the survey, it can be deduced that they convince their customers with a very good price-performance ratio.

Survival Z, the zombie apocalypse simulator, will arrive at the Apple Arcade tomorrow